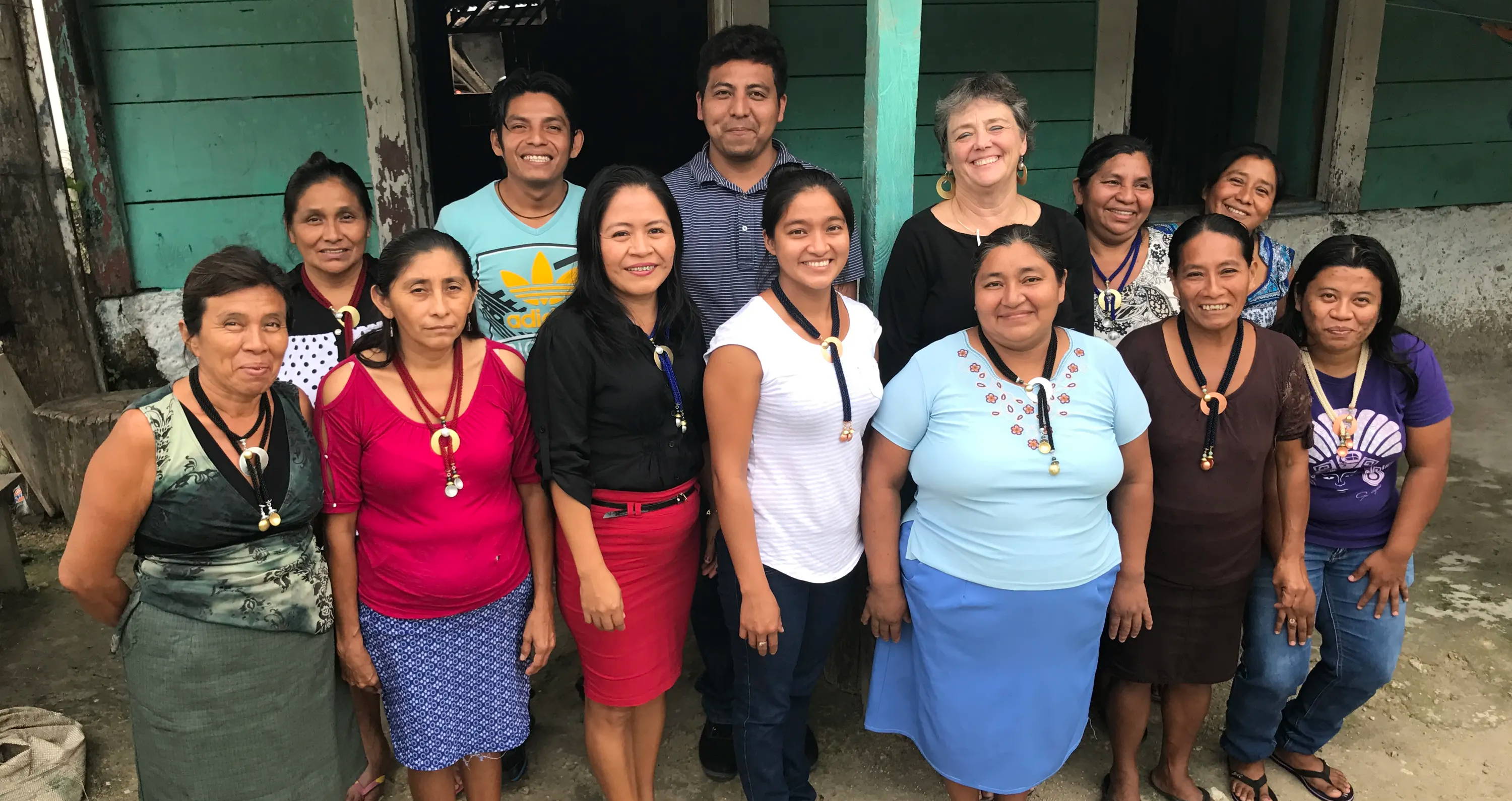 Chick Boss was formed in 2010 by sisters Pat Pannell and Jeanne Sheridan to provide training and living wage jobs for people from the remote village of San Andrés, on Lake Itza in Northern Guatemala. We know that anyone can be trained if they an eye for detail, an open mind and good work ethic.

In 2020 our artisans became a division of Itza Wood, another social impact enterprise based in San Andrés. The partnership will provide the oversight and scalability to develop the Chick Boss brand and allow Chick Boss to produce hand-made art jewelry in a safe, consistent, and efficient manner.

Chick Boss contributes 5% of all gross sales to human services and educational charities. As of July 10, 2022 we have contributed: 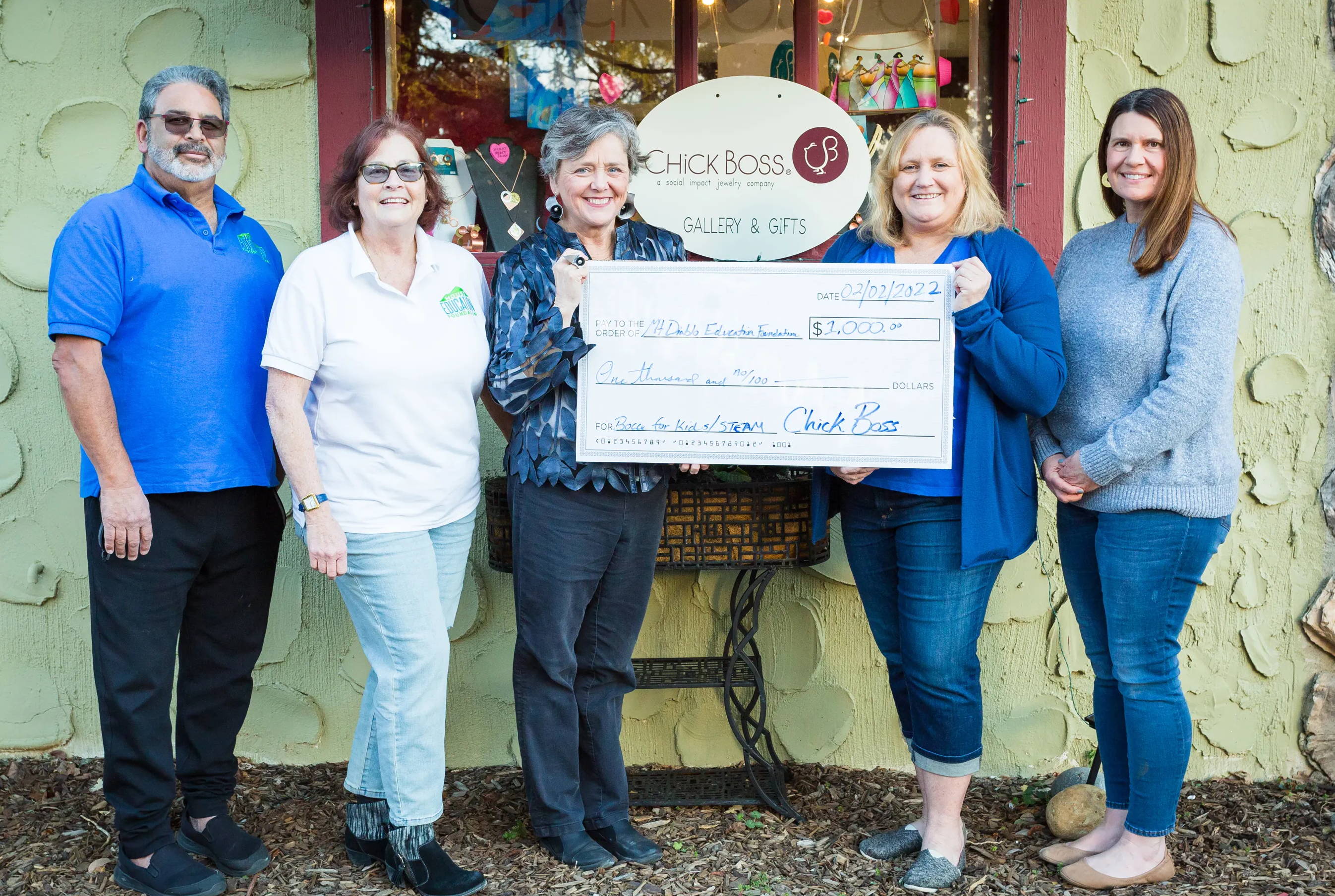 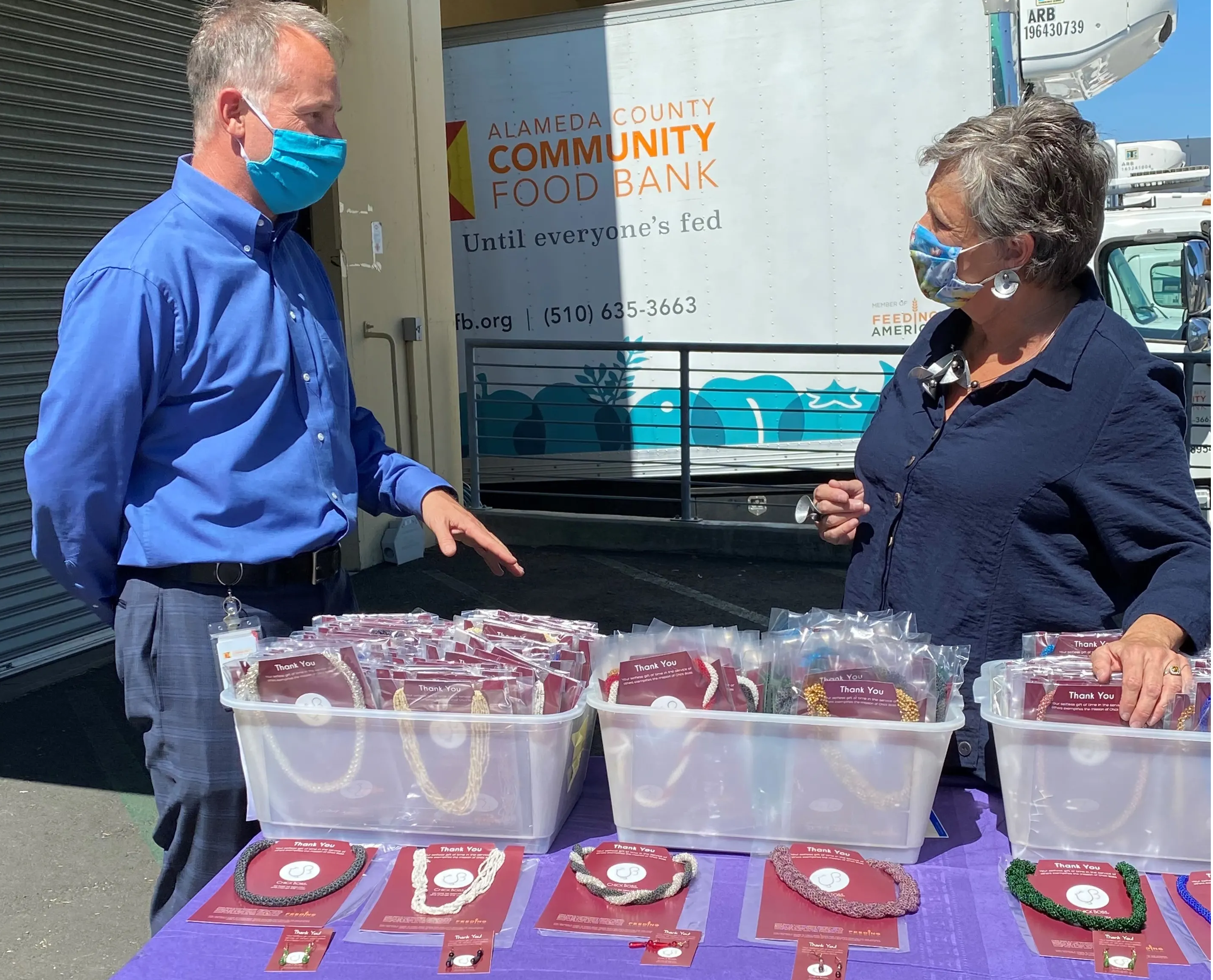 At the height of the pandemic, Chick Boss donated hundreds of necklaces and earrings to volunteers at the Alameda County Community Food Bank. Here is Founder, Pat Pannell with Bruce Elliot, Chief Operating Officer of the Food Bank. 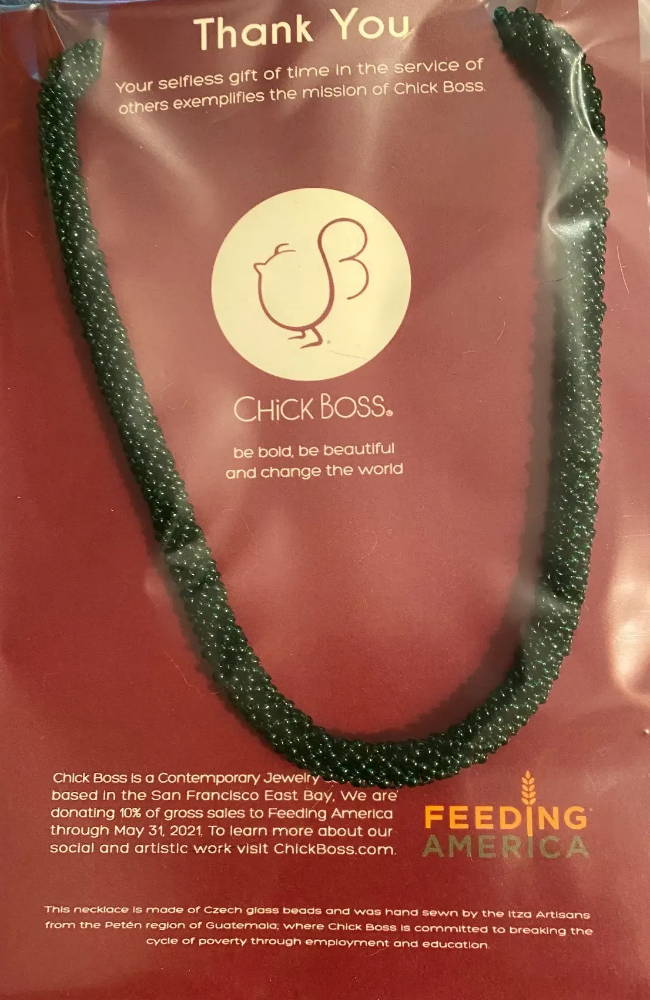 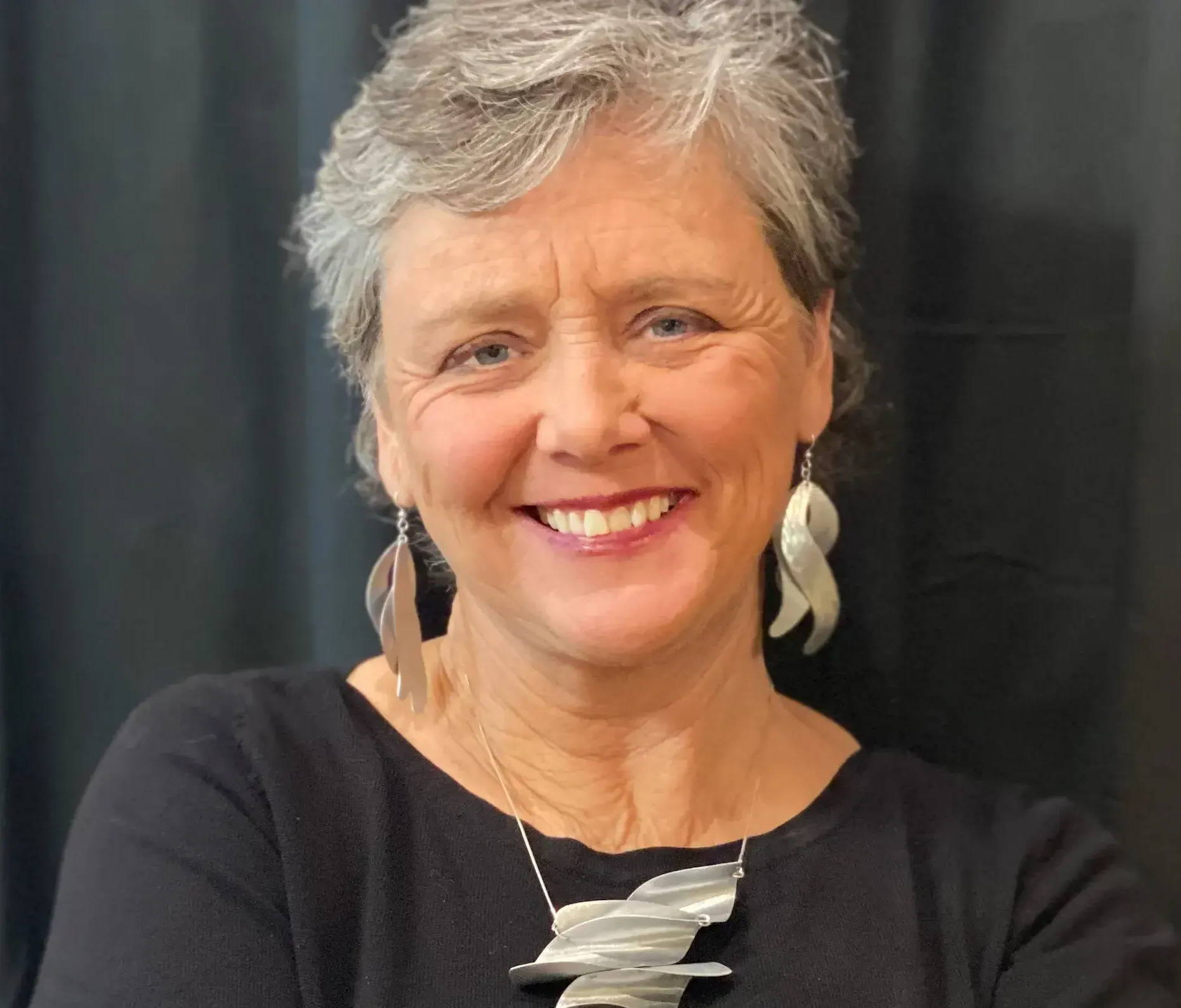 Pat Pannell ventured to the town of San Andrés in Northern Guatemala to study spanish in 2001. She has since sponsored the educations of 10 children who all completed high school and 4 have college degrees.
She holds an MBA and has had a long career in Business Management and Accounting. She and her sister Jeanne started Chick Boss to provide economic advancement for people from the region.
Pat and her husband live in the SF East bay and share a love for baseball, soccer, ballet, opera, theater and travel.
Jeanne Sheridan, Co-Founder, Designer
Co-founder Jeanne Sheridan, an accomplished artist and jewelry designer, challenged herself to design for production.
She developed our initial training programs in cold connection metals and beading which are still used in all of our collections.
Jeanne and her husband are both humble people and artists. They have taken inspiration from some of the many places they've lived including: American Samoa, The Faulkans Islands, Kauai and Sedona. 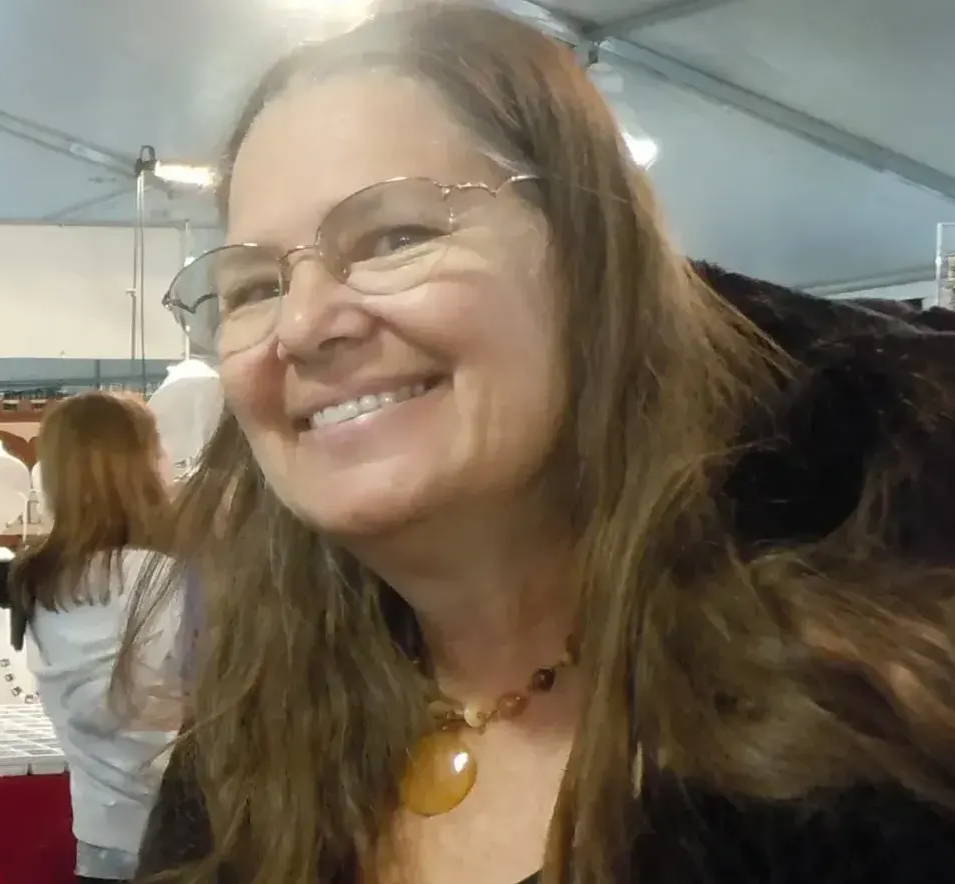 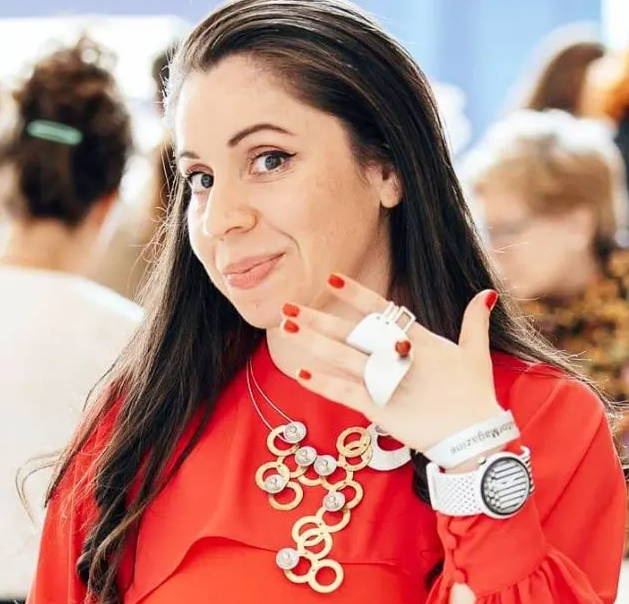 Mar is an industrial designer, visual artist and jeweler based in Guatemala. She marries organic forms with geometric shapes using classical metalsmithing techniques. Her designs are asymetrical sculptures for the body, taking up space, encouraging individuality. She has participated in contemporary jewelry exhibitions in Guatemala, Mexico, USA and Europe.

She works as a consulting artist for Chick Boss, lending her unique style to our collection concepts, skill in designing for production, and discipline in overseeing the creation of accurate specifications.

In true Chick Boss fashion, Emily made a BOLD move to pivot her extensive office career and dive further into Marketing and Advertising; a passion she pursued during college. She joined the Chick Boss team in 2020, immediately falling in the love with Chick Boss jewelry, the brand, and the purpose.

When she’s not designing and creating, or helping customers, Emily enjoys time with her husband, sons, and feline fur-babies. She also dabbles in creating unique & beautiful floral arrangements for fun! 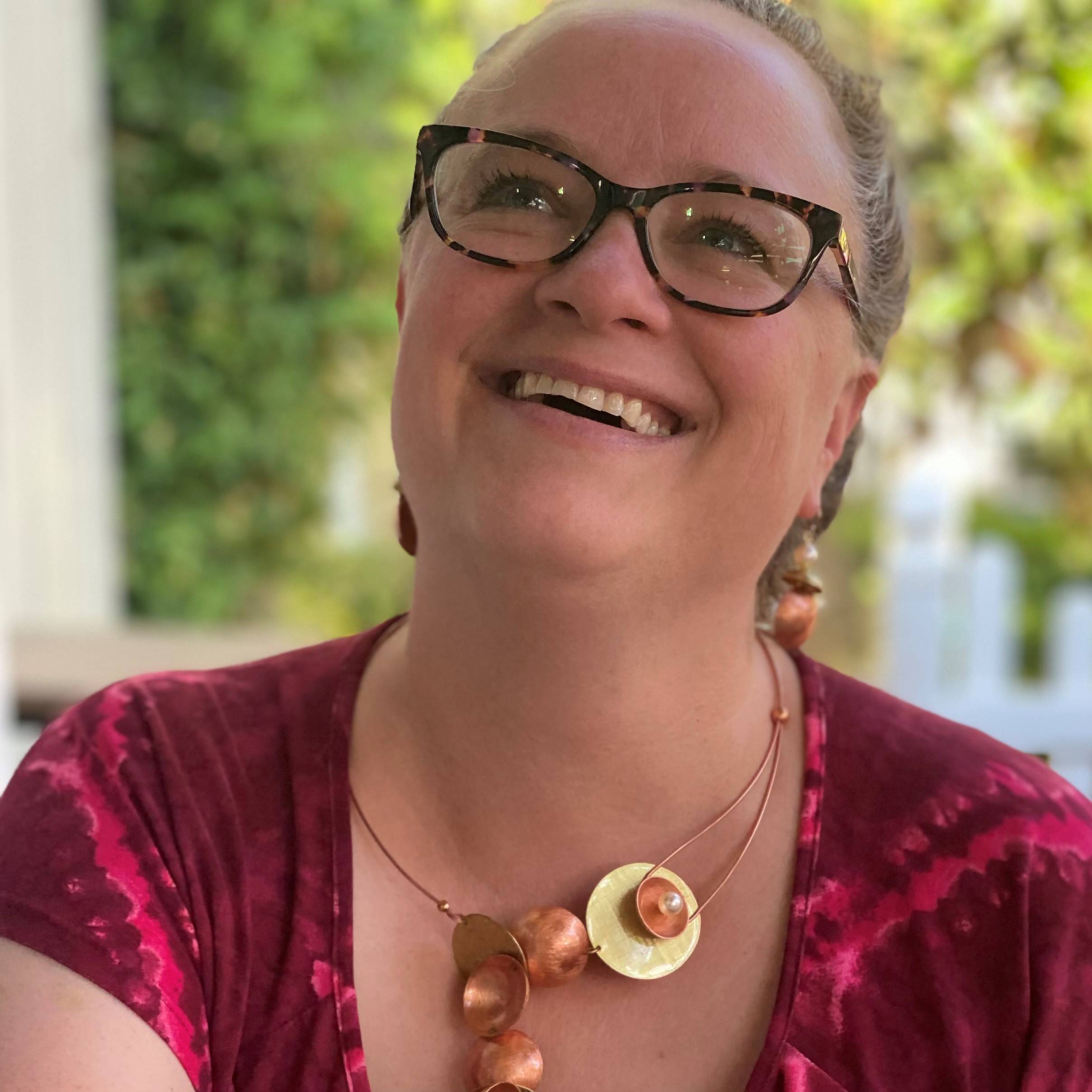 Maria Ester Silva, Sales Support/Bookkeeping
With Chick Boss since 2015
Originally from Managua, Nicaragua, Maria Ester now resides in Petén, Guatemala, about an hour from the Chick Boss Artisan workshop.
At the age of 18 she was awarded a scholarship to study Natural Resources at Oregon State.
She served as the Sales Manager for Chick Boss Guatemala from 2015 - 2018 and managed our store in the town of Flores, Guatemala. Maria Ester has assisted Pat at many trade shows throughout the United States.
She loves dancing and spending time at the beach with her husband and 3 children. 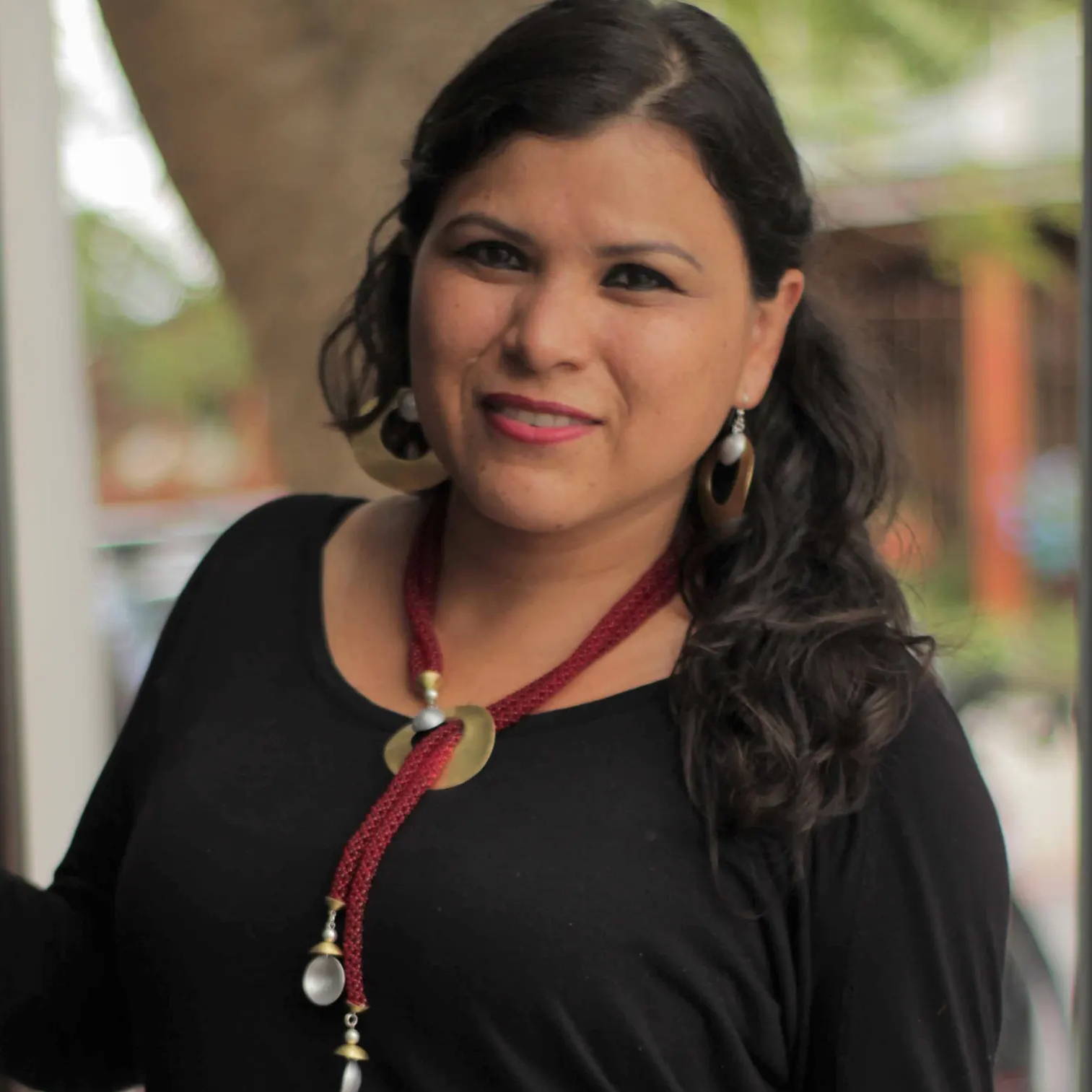 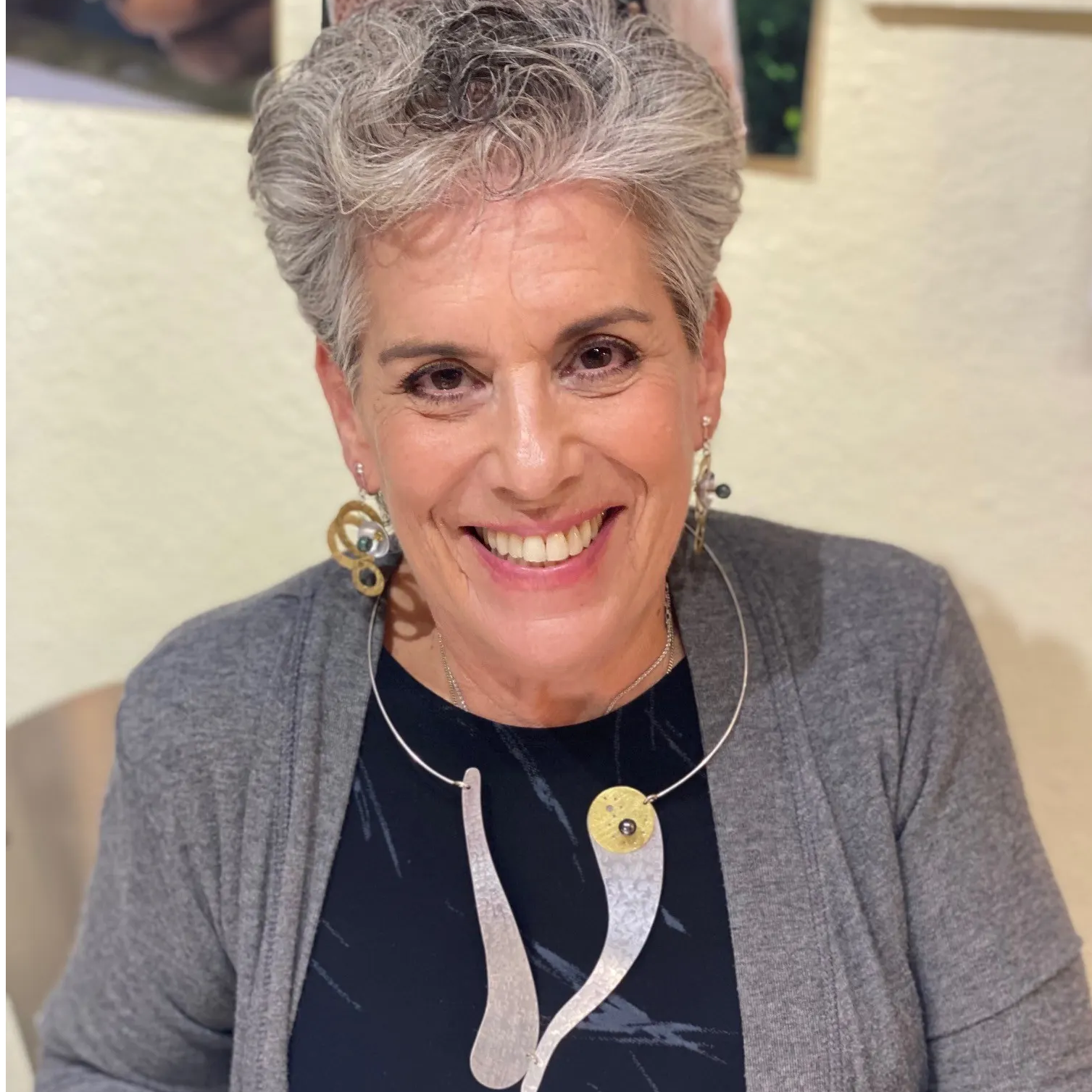 Carolyn Sladnick, Sales Associate, Clayton Gallery
With Chick Boss since 2021
Carolyn walked into the Chick Boss shop in Clayton, California in November and knew immediately that her 4 month foray into retirement was over!
She had a long career in procurement, most recently managing a team dedicated to supporting the San Francisco P.U.C.. She was also a manger at Hills Brothers Coffee and a buyer for the Clorox Company.
In addition to enjoying spending time with her family, Carolyn is an avid reader, knitter and loves hiking on Mt. Diablo.
Reginaldo Galvez Acosta
Senior Artisan, Design Team,
San Andrés
Naldo has been with Chick Boss since it's beginning in 2010. He marvels at how he gets to learn new things every day and create art from a simple piece of sheet metal. He is responsible for managing all aspects of our Guatemala operations from procurement and reporting, to production and fulfillment.

He and his wife Deysi have 2 wonderful children, Leonardo and Alexa. A recipient of a scholarship from Chick Boss, Naldo is currently writing his thesis towards a degree in Communication Sciences. His goal is to build his house and start a company that advises young people on how to find work. He is driven to serve the neediest in his home town. 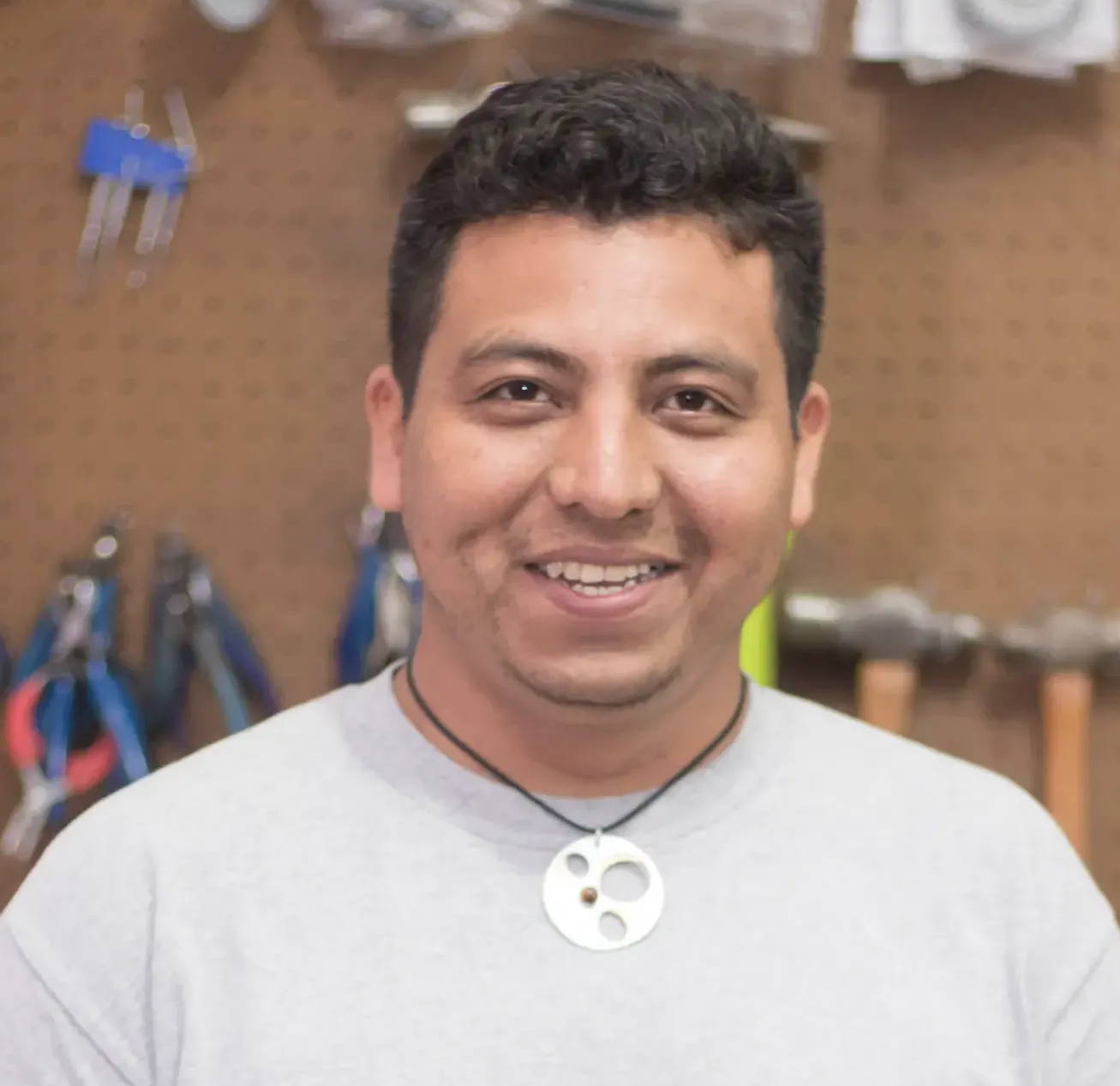 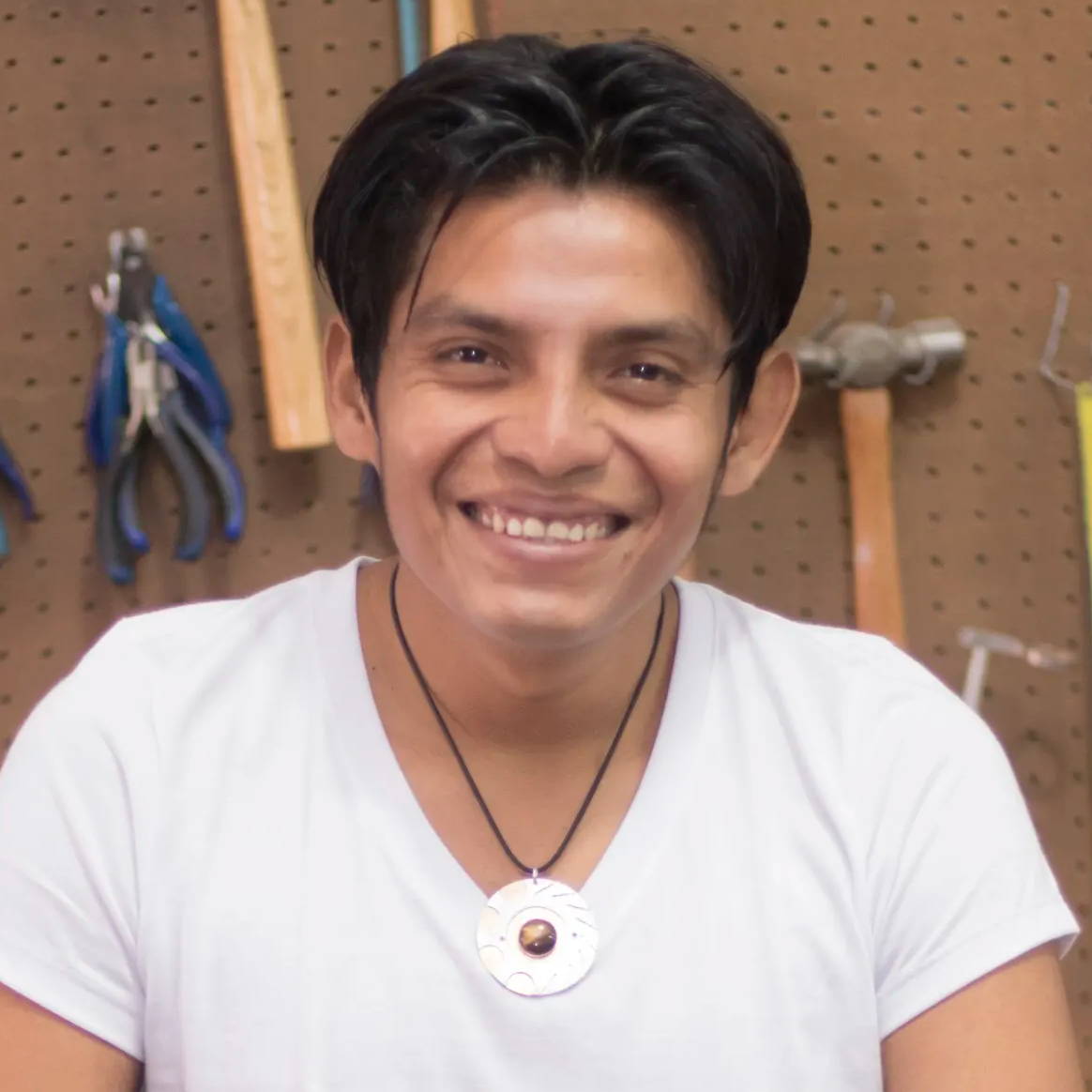 Donis Cha
Lead Artisan, Design Team, San Andrés
Donis has been with Chick Boss since 2014. He likes how different the work is, the environment, the camaraderie and humility of the team, the economic opportunity and the wisdom that they express through metal designs.
He has worked as a Computer Teacher, Motorcycle Service Consultant,Driver and Salesperson He, his partner and their 3 year old daughter Allysson Idania live his mother. Donis holds an associates degree in Business Administration and would someday like to found a Soccer academy with other friends.
Maria Galvez Tzul
Lead Artisan, Design Team, San Andrés

Maria is 30 years old and has been with Chick Boss since 2011. Over the years Maria has learned all aspects of our jewelry production. She loves being able to work with her hands.

Maria lives with her parents and wants to buy land and build a house with her own money. She has an associates degree in Physical Education and hopes to return to college in order to have more opportunities and continue to support my family. In her words, "A LOT OF THANKS TO CHICK BOSS FOR TRUSTING THE PETENEROUS CRAFTSMEN." 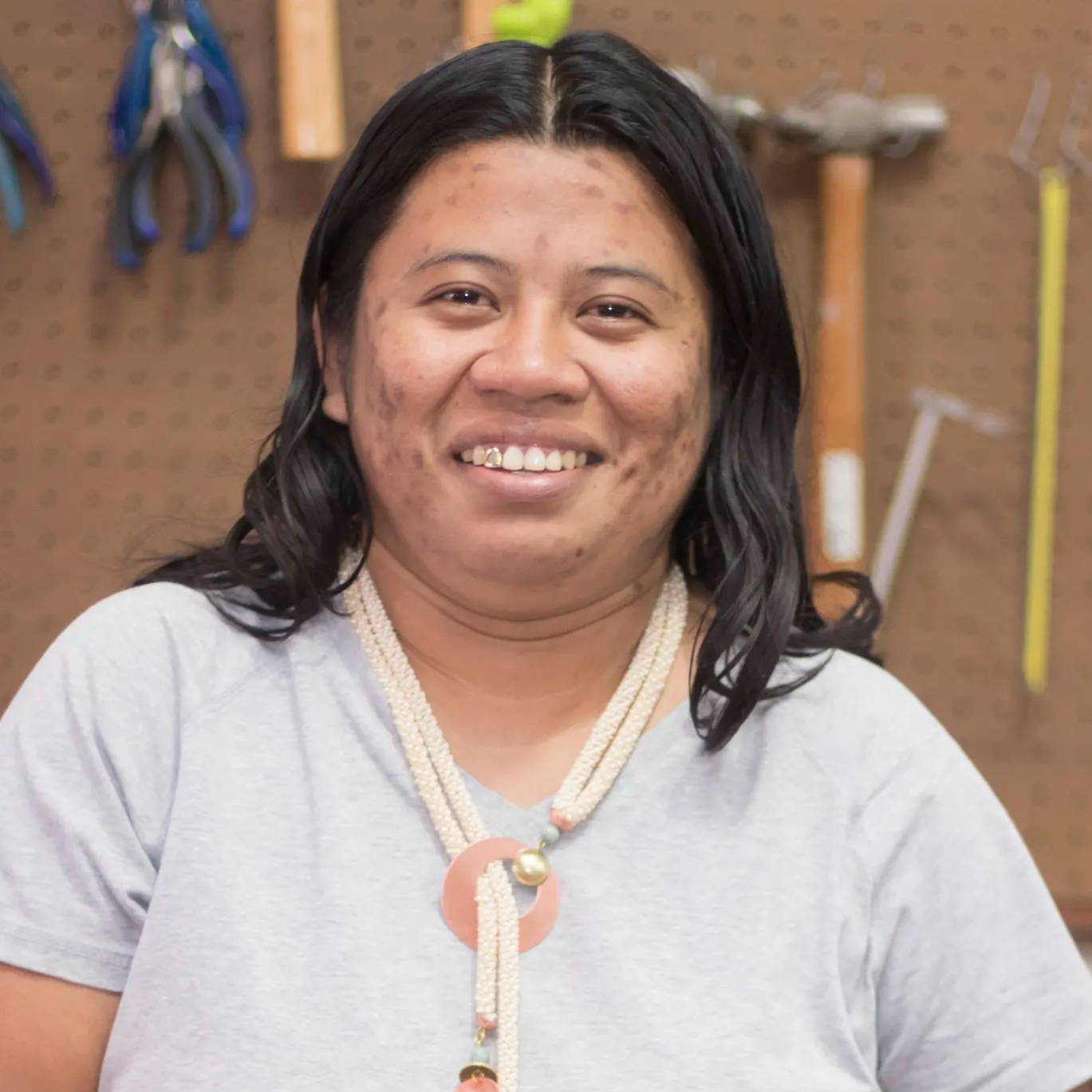 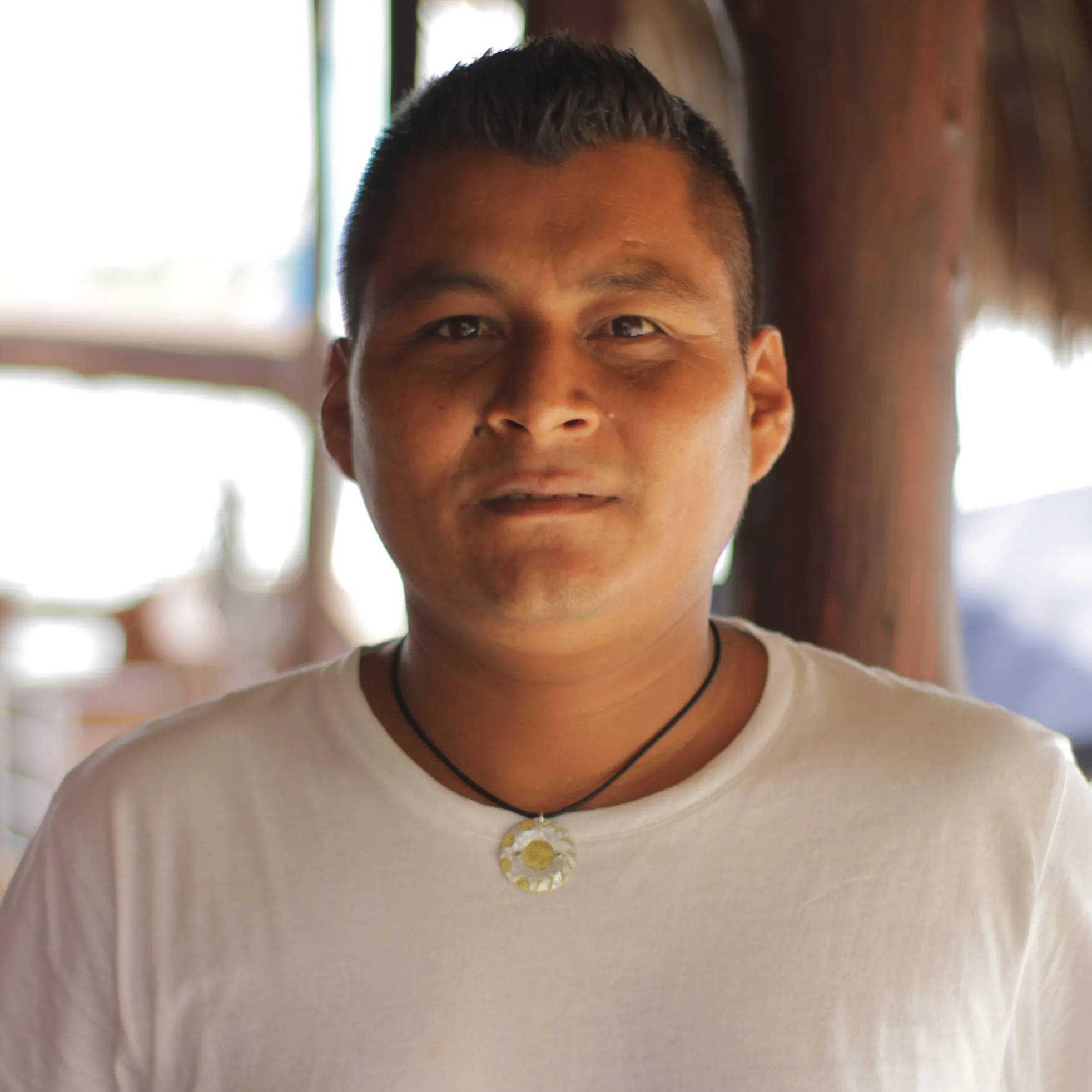 José Edelmiro Laínez
Lead Artisan, San Andrés
Milo describes himself as a simple and humble person. He likes to do a job well and dedicate himself to metal jewelry designs.
With Chick Boss since 2014, Milo likes the pleasant atmosphere, teamwork, and coming up with ideas for improvement. He's worked as a bread seller, bricklayer's helper, and forced labor in the fields.
He and his partner have 2 children and are currently building a small house for themselves. Having matriculated through 6th grade, he would like to expand his basic education and learn new crafts for more opportunities for his family. 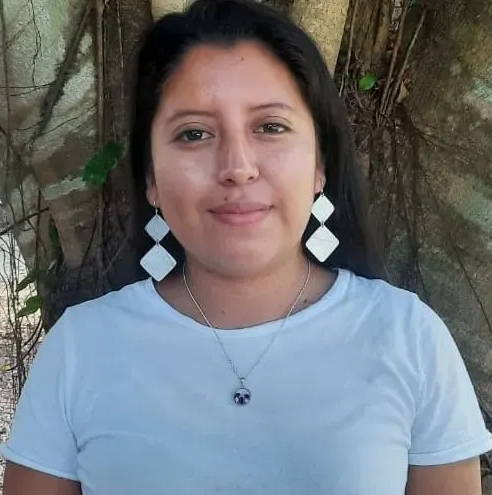 Madiley Yossmeli Mijangos Tesucún Apprentice Artisan, San Andrés
A charismatic person, Maidley believes that active and cordial relationships with others is vitalin both our social and work lives. New to Chick Boss in 2021, She is enjoying learning the different processes involved in making an excellent piece. By working as a team she gets to try different things, learn new things and becoming more efficient.

Before working for Chick Boss Madiley was a domestic worker. This is her first experience working for a company. She lives with her parents and other 5 siblings. She holds an associates degree in Tourism with a Hospitality Orientation and would like to go to university within the next 5 years. 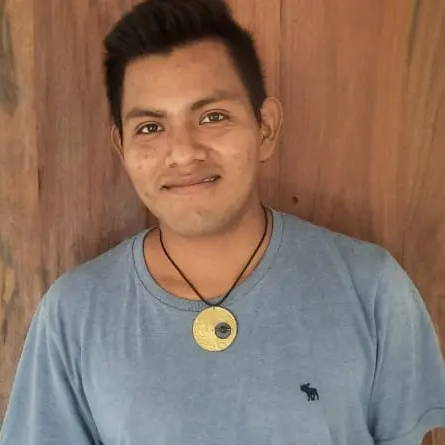 Elder Bolón Vásquez
Apprentice Artisan, San Andrés
Elder is friendly, respectful, gracious with friends and acquaintances. New to Chick Boss in 2021 he most likes being able to be part of the process of each piece. He's learning new things every day and appreciates how important each part of the process is to creating a beautiful final product.

He has worked as a forest firefighter and masonry assistant. He and his partner have a son. With an associates degree in Business Administration, Elder would like to one day have his own business that would generate job opportunities for youth.

“Chick Boss” is a nickname Pat was given by a late friend Bob Brayden; an outwardly gruff but lovely man who used to work for her. He called her “CB” for years, before anyone figured out what it meant. But the name also fits with our intent to empower women to take charge of their lives, destiny and look.